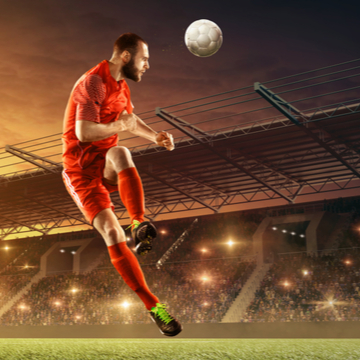 Head injuries in sports are a problem. Whilst there are now some rules in place to better support players, contact sports, particularly football and rugby often witness players suffering blows to the head from heading a football, to head-on collisions with other players. The bottom line is that players are at a high risk of suffering a head injury.

Cases of on the pitch collisions, and off the pitch dementia in former players have been highlighted in the news following several high profile cases. Here we take a look at the head injury risks involved in some sports.

“We welcome the work done by Dr Stewart and his team, but this study was always going to leave a lot of questions unanswered.

“We have known for some time there is a link between the cumulative effect of repeated blows to the head – such as those suffered by boxers – and degenerative neurological conditions such as dementia.

“The fact this long-awaited study has now identified a link in former footballers will no doubt lead to questions about how this will impact the modern game.

“It is vital this research is now built upon, with a particular focus on the relative risks of heading lightweight modern footballs.”

The Jeff Astle Foundation was set up after the death of footballer Jeff Astle who was the ‘first British professional footballer confirmed to have died from chronic traumatic encephalopathy (CTE), a progressive, degenerative brain disease found in individuals (usually athletes) with a history of head injury, often as a result of multiple concussions. In Jeff Astle’s case, it was the repeated, low level brain trauma believed to have been caused from the repeated heading of footballs.’

In light of research that shows a link between heading the ball and brain injuries, the FA introduced new header guidance to English football. The guidance states that “It will be recommended that a maximum of ten higher force headers are carried out in any training week.”

FA chief executive Mark Bullingham said that the FA is introducing “the most comprehensive adult football guidelines anywhere. Our heading guidance now reaches across all players, at all levels of the game. These measures have been developed following studies with coaches and medics and represent a cautious approach whilst we learn more. We are committed to further medical research to gain an understanding of any risks within football, in the meantime, this reduces a potential risk factor.”

The risks between head injuries and football are clear, however, it’s not just football -research suggests that rugby also has a lot to learn. Research shows that 20% of rugby injuries are head injuries. Many rugby players have been diagnosed with early-onset dementia. There is currently a list of more than 150 former players who are taking legal action against World Rugby, England’s Rugby Football Union and the Welsh Rugby Union for brain injuries.

World Cup winner Steve Thompson, former Wales back-row Alix Popham and ex-England flanker Michael Lipman were the first players to confirm they were part of the test group for the lawsuit, with all three revealing they had been diagnosed with early-onset dementia and probable CTE.

In rugby the sheer size of many of the players is a hazard, running and colliding at high speed. Concussion takes place frequently with many high impact collisions.

According to a new publication that looks into head injuries in sports A Delicate Game: Brain Injury, Sport and Sacrifice by Hana Walker-Brown ‘After collisions crucial tau proteins begin to build up inside the brain. These have a degenerative effect and sufferers typically enter several stages of decline‘ The publication details how sports are ‘belatedly introducing protocols that require players to leave the field of play after an incident and take enforced breaks from fixtures if they have officially suffered a concussion. Yet the overall impression to take from this is how many sports bosses are still reluctant to admit they have a problem.’

For many players, the research and the changes to football and rugby are too little too late. With the damage already done after years of play without knowledge of the harm that it has done to them and no protection in place.

Jefferies Solicitors is an advocate of Headway UK and has worked with it on numerous charity activities. We understand the various different ways in which a brain injury can affect survivors and their families. We support Headway’s Concussion Aware campaign

HAVE YOU BEEN AFFECTED BY Head Injuries in Sport?

If you or a member of your family has been affected by a brain injury then you can sometimes feel like there is a lack of understanding of your condition. A lot of research is still being undertaken about brain injuries and there is still more to be discovered.

If you have had a brain injury that was not your fault and would like to know more about pursuing a successful personal injury claim then please get in touch with our no win no fee solicitors today on 0800 342 3206 or fill in an online claim form.