At Jefferies Solicitors, we were curious to find out if there were differences in the way UK men and women perceive their NHS care – and to see if men or women were less satisfied with the treatment they receive.

While dissatisfaction does not necessarily mean there is a case of clinical negligence, it could be a growing problem whereby if people – male or female – are regularly receiving unsatisfactory treatment from medical practitioners then this could escalate into cases of clinical negligence when serious health issues could develop. We decided to put out a survey to uncover whether there, in fact, are a disproportionate number of women or men unhappy with the medical services they receive. So that the data was more tangible, we decided to focus on one specific set of medical practitioners – NHS doctors (including GPs and all other forms of NHS doctor). This would also give us a point for comparison in future research.

The results of the survey (answered by more than 1,000 people) shocked us as the UK-wide situation as far as women are concerned is much more serious than we anticipated.

49.7% of UK women have felt as if they have not been given an appropriate level of service by an NHS doctor

Close to half of the women in the UK have been dissatisfied with their treatment by an NHS doctor. This is staggering in itself, but compare it to only 35.6% of UK men and it becomes even more significant as it suggests a real discrepancy in either the delivery of service on the part of the NHS or in terms of the expectations of male and female patients. 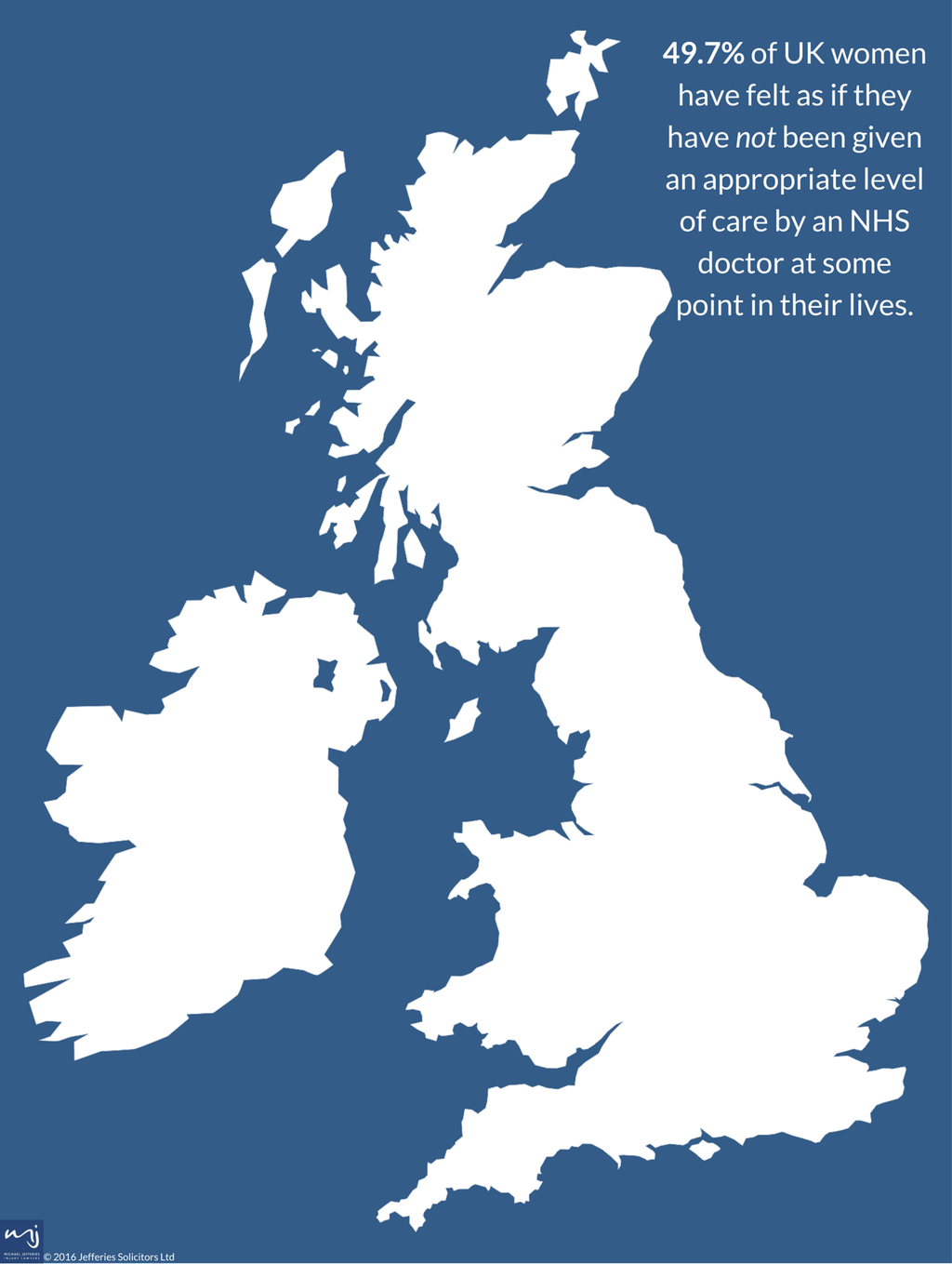 Women may tend to expect more from their NHS service than their male counterparts or, it could be that they have more dealings with NHS doctors due to factors such as pregnancy, childbirth and contraception – increasing the likelihood of dissatisfaction. However, drilling down into the data shows further issues on a regional basis.

If we break down the UK figures by age, we see that women aged between 25 and 44 seem to receive the lowest level of service, with 55.9% of 25-34-year-olds and 60.7% of 35-44-year-olds feeling their NHS doctors have given a poor level of care. Women over 65 were the least likely to feel this way, but 41.3% of women in this age group still felt as if their medical care was not good enough.

What does this mean in terms of clinical negligence?

Michael Jefferies, Director at Jefferies Solicitors had this to say about the findings:

“It’s clear that a significant number of women, particularly under the age of mid 40s, feel that the standard of care they receive from the National Health Service is inadequate, and that the problem is even worse in Wales and Northern Ireland. If this is how younger women feel, then the NHS needs to address the problem to establish if it is a justified criticism. We at Jefferies Solicitors deal with too many clients who have been injured as a result of clinical negligence, some very seriously, and it’s worth exploring every avenue to try to keep such incidents to an absolute minimum.”

Despite this poor performance by doctors, only 36.8% of UK women had faced similar issues with NHS nurses and other NHS service providers and, overall, women answered that they are generally satisfied with the NHS service they receive, suggesting it may be a more doctor-specific issue or expectations around the performance of doctors are higher.