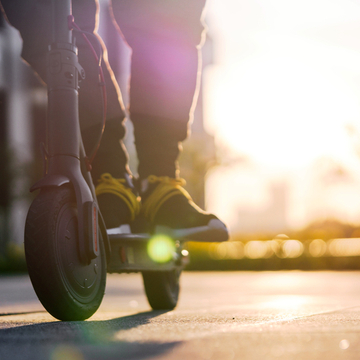 With the increase in publicly-owned E-scooters being dotted around some of the UK’s most populated cities, there has consequently been a rise in accident cases relating to them. There were 882 accidents involving e-scooters on the roads of Britain in a year, according to new data. This shows just how frequent these accidents can be as they have essentially added a new type of vulnerable road user across the UK. This has required a rapid focus to ensure legislation for e-scooter accidents is in place to help people claim compensation if they are injured at the fault of someone else on an E-scooter.

Recently a man in London was significantly injured whilst riding his privately owned E-scooter as he collided with a bus wing mirror leaving him with multiple fractured ribs, a dislocated right shoulder, and a collapsed lung. He contacted a solicitor’s firm down in London to help claim some compensation for this accident.

However, the law states that “a private e-scooter – as opposed to those that can be hired through official schemes– can be driven only on private land. That would appear to prevent anyone riding one who is injured on a public road from bringing a claim against a motorist”, as per the Law Gazette. Because of this, the client was unable to claim any compensation as the client was not supposed to be riding his e-scooter on a public road.

This has led to calls from legal professionals for a change in the legislation surrounding E-scooters, with a prominent focus on giving people who have been injured on a privately-owned E-scooter more protection by the law. This should then allow these people to have a better chance of claiming compensation for an injury.

The onus has now been put on retailers to offer sufficient information when selling an e-scooter and are not misleading customers on the rules of where they can and can’t use their privately owned scooters, with there being an estimated 75,000 privately-owned E-scooters in the UK.

Jefferies Can Help You Today

At Jefferies Solicitors, we are experts in road traffic accidents, specifically E-scooter road accidents. If you want more information on how we can help you then click here