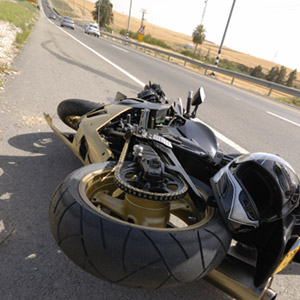 A couple who were out for a ride on their motorbike have been left fighting for their lives after a collision with a car in Northumberland.

The road traffic accident, which happened on 19 August, is believed to have been caused by the motor vehicle driver of a Ford Focus.

Following the accident St Johns Ambulance, Great North Air Ambulance and Northumbria Police were present at the scene. A man in his 50s was given anaesthetic and flown to Royal Victoria Infirmary in Newcastle.

The pillion passenger on the Honda motorcycle was a woman, also in her 50s. She is said to be suffering from life-threatening injuries and was driven by road ambulance to the hospital. The road was cleared by police after the accident.

Although it has not been confirmed, it is believed a man in his thirties was responsible for the crash due to dangerous driving. Road accident specialists have been questioning the man to find out more about the collision.

There had been a campaign throughout Northumberland warning motorcyclists of the dangers on the road and risk of road traffic accidents just prior to the accident.

It was later confirmed by the police that they had arrested the 35-year-old man who had been driving the Ford Focus.

Making a personal injury claim if you have had a motorcycle accident of any kind is simple with Jefferies Solicitors.

We are very experienced in dealing with a diversity of motorcycle accident claims. If you have been injured through no fault of your own then you may be able to launch a successful no win no fee compensation claim.

Losing your job or experiencing a loss of amenity because of your accident means that you lose out. By pursuing compensation, you are given the chance to redress the imbalance of injustice.