Once again, members of staff from Jefferies Solicitors have been busy fundraising; this time by participating in a 100km charity bike ride through Manchester and Cheshire.

On 4th September, four members of the Jefferies team took part in the Manchester 100 Bike Ride to raise money for The Children’s Adventure Farm Trust (CAFT). 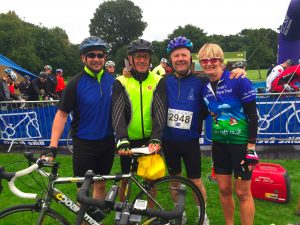 The group was led by our director Michael Jefferies and included Karl Rushton, Di Stow along with Di’s partner John. They completed the ride in 5 and a half hours and raised nearly £600 for CAFT.

After the ride, Michael Jefferies said: “Cycling 100km was definitely a challenge, but the team was in good spirits on the day. The thought of raising money for charity pushed us along. We’re also keen to encourage more people to cycle, so events like this are positive for the local community.

“It’s always a pleasure to raise money for CAFT – it’s a charity we’ve been working with for many years and it does great work improving the lives of children and their families.”

The sponsorship collected by Michael and the team, added to money raised from charitable events earlier in the year, helped us reach our £1000 fundraising target. However, you can continue to sponsor us for our efforts, by visiting our JustGiving page.