Earlier this year, we announced that we were sponsoring Commonwealth wheelchair racer, Callum Hall. We recently caught up with Callum to find out more about his journey over the last 5 years, get an update on his training for next year’s Paralympic games and what he likes to get up to when he’s not preparing for Tokyo. 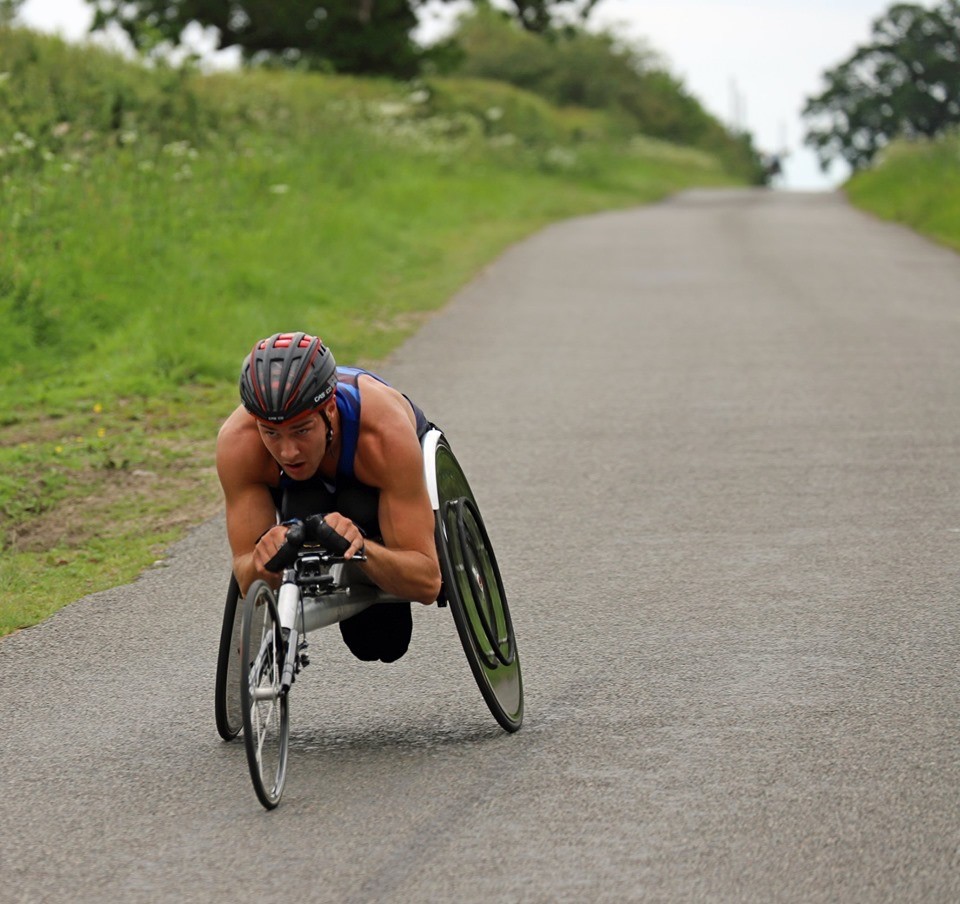 How did you get into wheelchair racing in the first place?

In 2012, after I became paralysed due to an epidural abscess on my spine originating from a sea urchin sting, I spent 4 months in Pinderfields spinal rehabilitation centre in Wakefield. Having been a sporty person pre-injury and a sport student at university I knew I would want to take part in and compete in sport once again. One of the inpatients and my family gave me the nudge to get involved in the sport, so as soon as I found a local club at the John Charles Centre for Sport in Leeds, I began some training. I first raced Leeds 10k and did it in 58 minutes, which is incredibly slow but I loved it! However, to give it some context, since then I have done a 10k in around 22 minutes (which is far less painful!)

How would you say the sport has helped you?

Getting back into sport was life-changing for me in several ways. My physical health was horrendous post-rehabilitation; I was getting tired just transferring into my chair daily and pushing around the house in my day chair. Something had to change and as I began going to a local gym 5 days a week. I was given a lift every day by my parents, and I realised I should probably learn to drive and get some independence. As soon as I started training more frequently and going to the gym I became really fit in the race chair, but also during my day-to-day life. Now, pushing my day chair doesn’t tire me out at all and I can do as many day-to-day activities without getting fatigued. What’s really strange is I am in better shape than I was pre-injury when I could walk!

However, the main way sport helped me was with my mental health. At the time, post-rehabilitation I thought I was mentally strong and completely over the shock of a life-changing injury. Looking back, I was in a bad place. I had random episodes of feeling down, got upset at the smallest of things and was frustrated at lack of access and not been able to do things I used to be able to do with ease such as getting upstairs etc. I used to be obsessed with the fact everyone was staring at me and couldn’t understand why. Through getting into sport I started to enjoy exercise and as I became fitter I became happier as my independence grew. As I lost fat through exercising I also put on muscle, which in turn made me confident in my self-image. My upper body became my “legs” to the point where I now climb the stairs every day on my hands and bum. I used to use a stairlift but it moved so slowly, plus when it breaks down you’re stranded, so crawling has become my new way of moving around. I also grew to understand the fact that people are simply intrigued as to why a 27-year-old, healthy man is using a wheelchair to get around, I guess it’s just human nature to want to understand why someone does something differently.

I met my wife (Callum is married to Paratriathlete and 2018 Commonwealth champion Jade Jones-Hall) through sport, which is the best thing to ever happen to me. I dropped out of university after I became paralysed, but she encouraged me to go back. I re attended and turned a 2:2 level degree into a 1st. I can’t help but think that without sport I wouldn’t have learnt to drive at that point, gained independence, found happiness, I wouldn’t have found Jade and I wouldn’t be anywhere near as happy as I am today. It blows people’s mind to think that myself (a paraplegic) and Jade (an amputee) live together independently. Jade and I often do talks at schools and businesses which help to educate people about what is possible for someone who lives their life as a wheelchair user and para-athlete. Sport has changed my life for the positive and I’m happier now than I was pre-paralysis, if there is one thing I would recommend to anyone who has recently become a paraplegic, who has poor physical or mental health it would be to take up some form of sport and exercise and see where it takes you!

How do you keep yourself motivated when training?

To train this frequently and at an intense level does take motivation. When I began my career in wheelchair racing, I had to chase the top guys. To this day I am still chasing the top guys. I also want to see just how far I can push myself. However, there are a number of other things that keep me motivated: remaining healthy, making my wife/family proud, representing my country and climbing the world rankings.

I enjoy the sport and to be able to continue to compete I have to keep pushing myself – the rest of the athletes in the world will leave you behind if you don’t! When I began training/racing marathons in 2014 I couldn’t stay with the top guys for 1 metre let alone 26.2 miles. This past year I’ve managed to stay in the mix and be in sprint finishes with the athletes who were at the front in that marathon in 2014. Progress is constant and as I continue to develop as an athlete, I become more motivated to keep pushing! 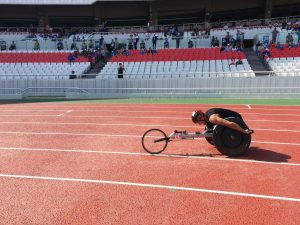 Callum at the finish of the Seoul international wheelchair marathon, where he achieved a 1 hour 32 minute finish time and a huge personal best.

What would you say has been your biggest achievement so far?

In terms of sporting performance based on finish time alone, I would say pushing a 1-hour 32-minute marathon. As soon as you start pushing around this time for a marathon you know you’re able to get amongst the mix of athletes at the front and develop this further. However, I’d say that my greatest achievement would be representing Team England at the 2016 Gold Coast Commonwealth games. If you had told me in 2014 that I would be representing England in Australia at a major games event, I wouldn’t have believed you. Gold Coast was an unbelievable experience; finishing 7th alongside witnessing my wife win a gold and bronze medal was absolutely priceless.

What have you got planned for the next 12 months?

The next 12 months will be some serious hard graft! I’ve taken a huge chunk off my marathon PB in the last year and I need to keep pushing hard to improve again. My power-to-weight ratio needs some work which means gym work will be heavier than ever and I will have to keep a close eye on my nutrition, which is the hardest part when you’ve got a serious sweet tooth.

I will be avoiding the icy/wet roads of the UK in the winter and heading to Spain for some warm-weather training. Last year this had a huge positive impact on my training –  I find uninterrupted sessions due to good weather and quiet roads far better than cold outdoor or constant indoor training on a set of rollers due to rain (the equivalent of a turbo trainer for a bike, just set up for a racing chair).

I have some interesting marathons coming up including Dublin, Oita, Singapore and likely another 3-4 next year which are yet to be confirmed. Oita is a great opportunity to produce a fast time since the world record was set on that course many years ago. 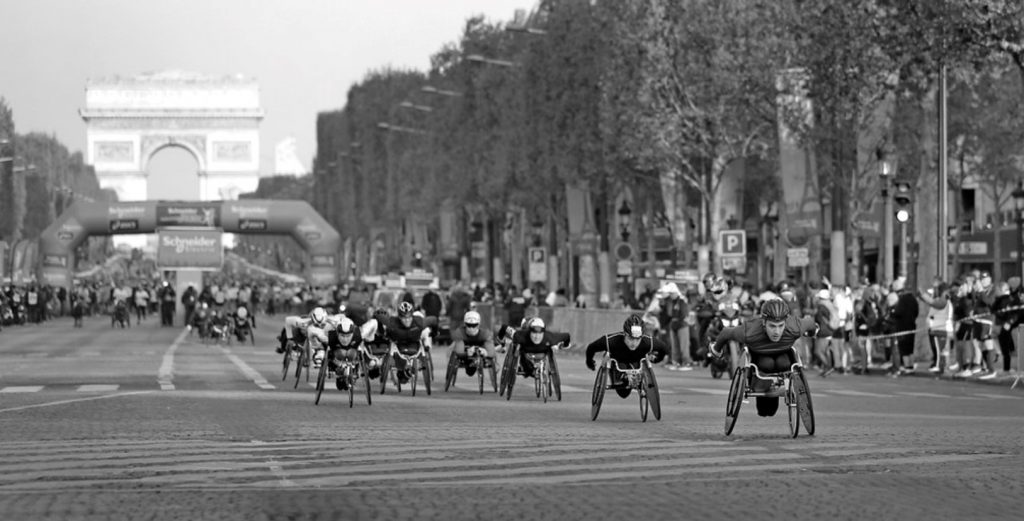 In the lead from the start for the first time at the Paris marathon.

When you’re not training for Tokyo, what do you like to do to unwind?

Top of the list for me when I’m not training is walking the dog. We have a miniature dachshund called Buddy who is full of character and a really good distraction from training. I also enjoy getting into a good boxset on the TV in between training sessions. However, the main thing is rest. Rest is absolutely crucial to athletes, so you have to learn to keep yourself occupied in between training. I’m from a big family, catching up with them on weekends over mum’s home-cooked Sunday dinner after a long training session is always good. Jade and I are also keen cooks so we’re always trying out new recipes, however, if I’m the charge they often end up in the bin! If Jade’s in charge it normally runs more smoothly; I think that just about sums up who is the best cook in our relationship!

Looking back, what advice would you give to your younger self?

I would say to exercise more often, get more involved in sporting groups and to take up exercise which makes you happy. The main thing I would say is to do what makes you happy. Stay involved in anything which you’re really interested in, if that’s in education, it’s much easier to push yourself and stay motivated when you’re interested in the topic you’re studying and you’re already enjoying it.

To learn more about Callum and to keep up to date with his training and Paralympic preparation, visit his Facebook page or find him on Twitter at @callumhallgb.