In the lead up to the Christmas party season, a new survey has revealed the nation’s drink driving habits – with shocking results. Nearly half of Brits surveyed (43%) admit to having knowingly driven over the limit, a fifth (21%) believe that there are techniques to sober up more quickly and 46% find the units measure confusing.

In the survey conducted by law firm Jefferies Solicitors, over a third (31%) admit to knowingly drink driving on more than one occasion, with the worst offenders being those aged 16-24 (50%).

Tips to sober up more quickly included drinking coffee or water, getting some air and having a cold shower, the survey revealed. Confusion over quantifying alcohol measures also arose as nearly half of respondents (47%) find the ‘units’ measure unclear, predominantly in the 25–34 age group.

Jaguar owners also fared the worst, with 71% admitting to driving over the limit, followed by Audi drivers at 57%. The safest drivers were those behind the wheel of a Lexus, Chevrolet, Hyundai or Volvo, with less than 30% taking the risk.

Worryingly, two-thirds of respondents (61%) admit to consuming alcohol the night before going to work and then operating machinery, posing risks to themselves and others. What’s worse, 34% go for a drink after work and 36% drive home afterwards – figures that could drastically increase during the festive season.

The safest drivers were those living in Plymouth, with over two-thirds (67%) of residents having never driven over the limit. Londoners scored the lowest with just 45 % having never committed the crime.

However, there was an overarching attitude that the nation would like to be more responsible – 82% think that England should have a stricter policy on drink driving and opt for a zero tolerance approach like Scotland.

Michael Jefferies, managing director of Jefferies Solicitors comments: “During the festive season, along with all other times of the year, it’s very important that people take extra care when driving on the roads, particularly if they’re heading out for a drink. Unless you’re clued up about units, the safest way to travel around is with a designated driver or taxi. We take on an increasing number of motoring offence claims related to drink driving around this time of year – the types of accidents that can easily be avoided, including those resulting in serious injuries or fatalities.”

*Survey of 1000 people conducted by Censuswide on behalf of Jefferies solicitors in October 2015. 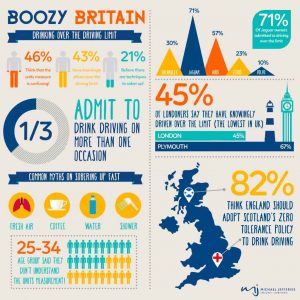